San Jacinto College has a paid internship opportunity at NASA’s Johnson Space Center.  The pay rate is $20/hour for an undergraduate student and $24/hour for a graduate student.  The successful candidate works with NASA professionals on projects related to the International Space Station and space travel projects.

They are looking for a student that can work 20-35 hours a week around their class schedule.

Thank you for your consideration. See the following attachment for details.

AIAA Houston Section provides sandwiches (our treat) from Jimmy Johns based on the crowd size using the online registration. AIAA Houston Section in collaboration with the South Western Aerospace Professional Representatives Association (SWAPRA) invites you to a luncheon with a special speaker, Mr. Gene Kranz, Former NASA Flight Director. His talk, “Failure is Not an Option” will be at Bay Oaks Country Club on January 29th, 2014 at 11:30am and will discuss the Apollo 13 crisis, the stresses and challenges, and how it was all overcome.

As this is a plated luncheon hosted by SWAPRA, RSVP and payment are required as described in the two steps below.

Step 2.) Non-Members must pay according to the following fee schedule at the PayPal link below:

$35.00 for Non-members at the door (IF seating is available)

Eugene F. Kranz was born in Toledo, Ohio, on August 17, 1933. He was schooled at Parks College of St. Louis, Missouri, in 1954 and received a BS in aeronautical engineering. Before his work with NASA, he was an Air Force captain (1955-1958), flight test loads engineer, McDonnell Aircraft Corporation (1954-1955), pilot in U.S. Air Force (1955-1958), and flight test engineer and supervisor of carrier and missile system flight test maintenance and checkout at the McDonnell Aircraft Corporation at the Holloman Air Force Base in New Mexico (1958-1960). He joined NASA in 1960 in the Flight Control Operations Branch, NASA Space Task Group, at Langley Research Center in Hampton, Virginia (1960-1964). In time he rose to become chief of the Flight Control Operations Branch, Mercury assistant flight director, Gemini flight director (1964-1968), chief of the Flight Control Division, Apollo flight director, and Skylab flight operations director (1969-1974), deputy director of flight operations, Space Transportation System (STS) mission operations director (1974-1983), and finally eirector of mission operations of the STS (1983-1994).

Gene Kranz’s presentation will include:

As the leader of the “Tiger Team” of flight directors who brought the Apollo 13 spacecraft safely back to Earth on April 17, 1970, Gene Kranz demonstrated extraordinary courage and heroism. An extraordinarily gifted leader and motivator, Kranz inspired his Tiger Team to hold fast to the highest standards possible. Together, they struggled to devise the plan that would safely bring the ship and its crew of three astronauts home after its oxygen system failed.

“Failure is not an option,” the motto that carried him through the Apollo 13 crisis, is a major theme of his motivational speeches today. Kranz speaks with passion and pride about the NASA employees who formed his mission teams—teams that worked hard and made history in the 1960s and ‘70s. He explains that his flight directors were young engineers and scientists, most of them in their twenties, having come to NASA fresh out of school with little work experience, but with abundant energy, and the will to succeed at one of humankind’s most challenging endeavors: space exploration.

The Apollo 13 crisis pushed Kranz and his team to the brink of fear and doubt, but they refused to give in to these emotions or to succumb to panic. Instead, under his leadership, they worked together to save the imperiled spacecraft, and brought the ship and crew safely home. Kranz speaks with a raw brilliance about the challenges and problems that they successfully faced and overcame, giving his audiences the inspiration that they need to face down challenges and adversity in their own lives and careers.

Please send any questions or comments about the event to Chris Elkins at celkins@atec.com or call at 281-276-2792 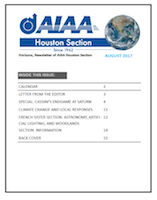