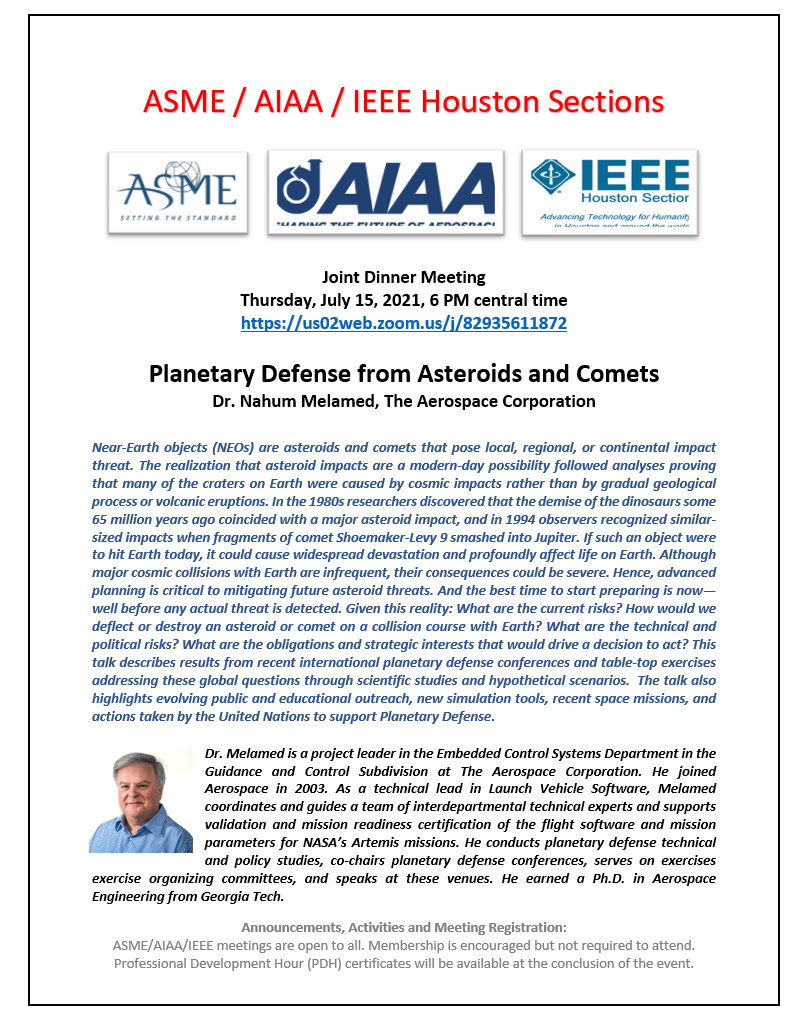 Join the meeting via ZOOM

Dr. Melamed is a project leader in the Embedded Control Systems Department in the Guidance and Control Subdivision at The Aerospace Corporation. He joined Aerospace in 2003. As a technical lead in Launch Vehicle Software, Melamed coordinates and guides a team of interdepartmental technical experts, and supports validation and mission readiness certification of the flight software and mission parameters for NASA’s Artemis missions. He conducts planetary defense technical and policy studies, co-chairs planetary defense conferences, serves on exercises exercise organizing committees, and speaks at these venues. He earned a Ph.D. in Aerospace Engineering from Georgia Tech.

Abstract – Planetary Defense from Asteroids and Comets
Near-Earth objects (NEOs) are asteroids and comets that pose local, regional, or continental impact threat. The realization that asteroid impacts are a modern-day possibility followed analyses proving that many of the craters on Earth were caused by cosmic impacts rather than by gradual geological process or volcanic eruptions. In the 1980s researchers discovered that the demise of the dinosaurs some 65 million years ago coincided with a major asteroid impact, and in 1994 observers recognized similar-sized impacts when fragments of comet Shoemaker-Levy 9 smashed into Jupiter. If such an object were to hit Earth today, it could cause widespread devastation and profoundly affect life on Earth. Although major cosmic collisions with Earth are infrequent, their consequences could be severe. Hence, advanced planning is critical to mitigating future asteroid threats. And the best time to start preparing is now—well before any actual threat is detected.

Given this reality: What are the current risks? How would we deflect or destroy an asteroid or comet on a collision course with Earth? What are the technical and political risks? What are the obligations and strategic interests that would drive a decision to act? This talk describes results from recent international planetary defense conferences and table-top exercises addressing these global questions through scientific studies and hypothetical scenarios. The talk also highlights evolving public and educational outreach, new simulation tools, recent space missions, and actions taken by the United Nations to support Planetary Defense.